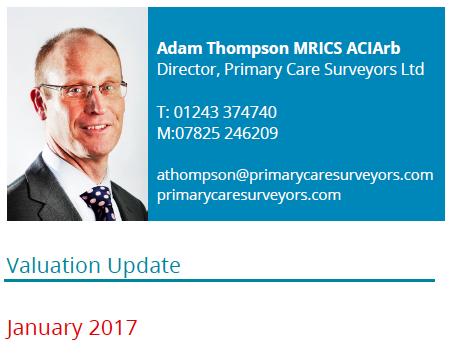 At the start of a new year it is always interesting to look back at work undertaken over the previous twelve months, and to try to anticipate what is going to happen in the year ahead.

The volume of valuations undertaken by our company has increased noticeably in recent years, and this trend looks likely to continue.  Prior to 2016, the increase appeared to have been driven by partner doctors from the baby boomer generation retiring from practice.  However, 2016 saw a change in the main driver behind surgeries undertaking valuations, with the predominant reason now being mergers taking place between practices.

Many practices that previously worked together in a collaborative or federated way, have now progressed to full integration and an increasing number of our as-yet unintegrated clients are talking about practices they are keen to merge with.  This is changing the way we do business in that traditionally one client has equalled one property, but we are now increasingly finding that our clients hold portfolios of multiple properties.

The basis of value in valuations often has regards to the rental payments paid to practices under the National Health Service (General Medical Services – Premises Costs) (England) Directions 2013.  There have been some issues with the most recent incarnation of this document, which became effective on 1 April 2013, concerning the rent review procedure for leased premises and the way in which capital funding is allocated to new or altered premises (under the Estates & Technology Transformation Fund), where capital payments can impact on rent.  Further consideration is needed as to how this applies to leased premises, and hopefully this will be addressed in the revised Premises Directions.  These were due to be published in the autumn of 2016 but are now likely to publish around Easter this year, at which time I will be commenting on whether these issues have been resolved.

Turning to rent reviews, NHS England is gradually catching up with its backlog of those that need to be instigated, and we are still only just starting the procedures for rent reviews falling due in 2015.  Early indications are that there is greater opportunity for rental growth, with uplift in rents meeting less resistance from the District Valuer than was previously the case.  Hopefully this will ease further as the new year progresses.

Influenced by economic uncertainty and political change, healthcare is becoming ever more topical and this has the potential to positively impact the progression of new developments.  Looking forward to a productive 2017.