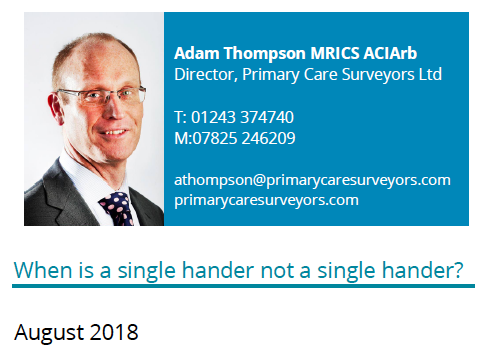 The phrase “single hander” is often bandied about within primary care; it refers to GPs who run their own practice without any partners and may typically have a patient list in the range of 1,500 – 3,000 patients.  Historically there have been many single handers, but following notable cases of clinical negligence, and even criminal offenses, the trend has been towards reducing the number of single handed practices within primary care. Much of this will happen through natural wastage, with many of the GPs who have preferred to operate as single handers now nearing retirement.

Conversely, there is another tranche of GPs who have referred to themselves as ‘single handers’ – but, on delving into the practice further, it can be identified that they have as many as 8,000 patients.  Clearly, they are not providing this service as a single hander in the traditional sense and in fact are relying upon a work force of salaried GPs.  Sometimes the situation has come about through circumstance, typically where a partner was leaving and there was a very limited number of applicants to fill their position, with those only being interested in a salaried position rather than partnership.  For the incumbent partners, the immediate need was to get capacity, and any GP, whether they be partner or salaried, would have been gratefully received. This solution would have been fine in the short term, or typically until the next retirement, and again the recruitment may have led to another salaried GP joining the practice.  Ultimately, however, this compounds the situation of retiring partners and an increasing number of salaried doctors.

To return to the issue of the single hander with 8,000 patients – or, perhaps more correctly termed, a principal doctor who in turn employs salaried staff – I have come across some practices where the principal GP has offered only salaried positions and is not actually seeking partners.  Some of these practices have been in existence for a while, and I have seen more and more of them in recent months, which indicates a greater feeling of confidence amongst GPs.

Having said that, in my meetings with GPs, the most commonly used phrase is that of ‘last man standing’.  I often challenge GPs as to what they mean by this, with it often being that they’ve heard this phrase and feel it must be addressed.  When this is probed further, the issue is ultimately worry over the future of the practice and the inability to recruit new partners.

As with any business, prospective partners tend to be attracted to proactive, successful, profitable businesses.  A practice that is negative in its mindset and is looking at how to ‘get out’ is not conducive to attracting new partners.  Whilst profits of GP practices have been under pressure in recent years, the progressive practices are being able to maintain profitability, often by introducing new working practices and collaborating with nearby practices (sometimes initially as federations or alliances which may then lead to mergers), since those other practices tend to be facing the same pressures.  If a practice is providing good healthcare, operating from good premises and has a reasonable size patient list, the practice should be resilient and sustainable.

The issue has often been that practices have not managed succession particularly well. Yes, there have been some practices where the age range of the partners has been rather narrow, which can cause problems when retirement of many partners is looming within a narrow time frame, but it is safe to say that they knew this was coming!  How to address it depends on where those patients are going to be treated from in the future.  If the practice is small, operating from a house conversion type surgery and there are other practices nearby, then it might be that the practice might wither away, with patients dispersed to neighbouring practices.  This can put pressure on those other surgeries, or it might provide opportunities for those other practices.   Either which way, the CCG needs to ensure there are adequate healthcare services to meet the needs of the population.  This is in turn can sometimes provide the solution to the ‘last man standing’ issue.

Assuming the intention is for the practice to continue, the possible solutions depend on whether the surgery is owned by the partners of the practice or if it is leased. If the former, details of any outstanding mortgages need to be disclosed; likewise if it is leased, then terms of the lease need to be considered.  Once these have been reviewed, and assuming there is then an intention for the practice to continue, a strategy can then be developed to address the issue of last man standing.

Given the increasing population, the age profile of the population and the ever increasing demand for healthcare services, the situation is often more optimistic than is initially expected.