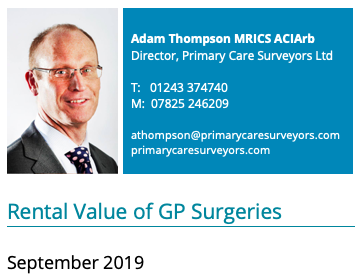 We are often asked; What’s happening to rents on medical centres?

There is a general sense of frustration that rents have not increased much recently, with many doctors and practice managers comparing the increase in rent for their surgery to the increase in the value of their home. Whilst there are obvious differences between the rental value of a surgery and the capital value of a house, ultimately these are all property values and the link is understandable.

Overall, the growth in rental values of doctors’ surgeries has been rather humble over the last 10 years; there was no rental growth between 2009 and 2013, and only modest growth thereafter. Whilst it seems distant now, the economy was in a recession, or in a period of very low economic growth, during 2009–2013. In this time, many rent reviews were not instigated, either by the NHS or by the GP practice (or landlords of surgeries subject to leases), since there was a general acknowledgement that it was very unlikely to result in an increase in rent, and a fear that the level of rent could even be reduced.

For surgeries that are partnership owned assets, it is true that the amount of notional rent can be reviewed downward at each rent review (although it is generally rare for this to happen). However, for leased premises the rents can only be reviewed downwards if the lease allows for this, with most leases stipulating that the rent can only be reviewed upwards, or alternatively that the rent review can only be instigated by the landlord, and the landlord would be unlikely to instigate this if there was a risk the rent might go down.

Going back to the issues of rental growth… Whilst details of the overall economy have been mentioned, there are also issues relating to the particular circumstances of the healthcare property market. Higher levels of rent tend to be paid for newly constructed medical premises, since these are of higher specification (as they tend to comply with the latest guidance from the Department of Health) and are more expensive to build. A corresponding higher level of rent is therefore required in order to make construction viable.

Due to the overall state of the economy, there was funding for new medical premises leading up to circa 2009; but with the recession that then followed, and the subsequent period of austerity, there was a lack of funding for new premises, hence a dearth of supply of new premises. With no new medical centre development driving the establishment of higher levels of rent, the opportunity to secure an increase in rent was frustrated when it came to rent reviews for existing premises.

In more recent years, there have been initiatives to improve the pipeline for new medical premises. One example of this is the Primary Care Infrastructure Fund (2015–2016), which became the Primary Care Transformation Fund (2016–2017) and thereafter was known as the Estates & Technology Transformation Fund (ETTF). Where these schemes differ from previous funding is that they essentially involve capital funding of new premises as opposed to revenue funding, the intention being to reduce the impact of new medical centres upon the annual revenue budget of the NHS.

The starting point in considering the viability of a new medical centre is to consider what the rental value will be, taking into consideration that the rental payment will be abated proportional to any NHS capital used to subsidise the cost of construction. It follows that there needs to be a significant increase in rent to make the delivery of a new medical centre viable.

The cost of developing new medical centres has, correspondingly, increased significantly over the last three years. Typically, about 10 years ago, the cost of constructing a medical centre was circa £1,500 per square metre; but we are now looking at construction costs in the range of £2,000-£2,500 per square metre, largely due to the increased costs of raw materials and labour.

The impact of such increases in cost is evident when comparing the estimated rental costs from the period to 2013, to the costs required in the present day, as demonstrated in the table below:

The table indicates where rental values now need to be, in order to make the delivery of medical centres viable. The reason for the interval from 2013 to 2019 is that essentially very few medical centres were constructed in that period of time. In the few instances where medical centres were delivered, this was often due to ‘yield compression’ (i.e. the capitalisation rate applied to the rent to derive the capital value was higher due to the lowering interest rates). With interest rates now being low there is no scope to increase the capitalisation rate, therefore the only way to make the development of a new medical centre viable is by increasing the level of rent.

Many District Valuers are looking back to rental values that were pertinent in 2013 and are refuting the level of rents now required to make medical centres viable, which will inevitably lead to some developers refusing to proceed with developing new premises at the levels proposed.

However, pressure is being brought to bear by NHS organisations in areas where there is a need for new medical facilities, essentially due to growth in residential population, and therefore new, higher levels of rent are gradually being agreed with District Valuers.

Although we cannot expect rental value for existing surgeries to increase to the same level as newly built medical centres, this will at least provide scope for general increase and it is encouraging to see an end to the period of stagnation and a move towards rental growth.