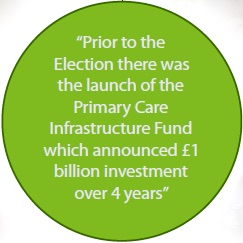 Adam Thompson, Director of Primary Care Surveyors, writes for Management in Practice magazine.  In this article, he discusses the government’s Primary Care Infrastructure Fund and the £1 billion investment available over 4 years to support primary care properties. Read on to find out more about the funding and how it will affect the sector.

Premises has been much talked about over the 12 months, particularly with recent focus being the lead up to the General Election. Prior to the Election there was the launch of the Primary Care Infrastructure Fund which announced £1 billion investment over 4 years (£250 million per year). Overall this equated to approximately £12,000 per surgery so perhaps isn’t as significant as it would first appear.

Applications for allocation of funding of the Primary Care Infrastructure Fund needed to be received by February and were announced at Easter, just before the General Election. Generally most of the approved applications relate to extensions and improvements to existing surgeries with there having been a few commitments to new medical centres being granted. Where new medical centres have been approved, the challenge is that most doctors prefer to procure new premises via a third party developer which in normal circumstances will require revenue funding from the NHS, however, funding under the Infrastructure Fund tends to be capital as opposed to revenue. If, however, new funding has been approved, this is caveated because the Primary Care Infrastructure Fund has a 4 year life to it where of course revenue funding will invariably continue beyond that. The question as to what happens after the 4 year period has been left at the doorstep for clinical commissioning groups (CCGs) to answer.

The conclusion of the foregoing is that there does not appear to be a clear strategy or commitment yet with regard to primary care premises, however, there is an accepted view that there does need to be a significant change in the property infrastructure. Generally the system is encumbered with too many small surgeries with it being generally accepted that there is a requirement to have fewer but larger medical centres. The challenge remains how to bring this about with there still often being no strategy, especially at a local level.

The other recent issue that is coming up is that of private providers who wish to complement the activities of a GP practice. Different models have been proposed by different operators, some being that they will employ the non-clinical staff and take responsibility for the administration and operation of the Practice, leaving the GPs to carry on as contract holder and focus on patient care. Other models focus on the referral profile of Practices and to provide a more efficient way to seek quicker access to such services as diagnostics. Such models will be dependent on there being a significant patient list which is fine in major conurbations but may not help rural communities. Where rural communities may end up benefiting is from expansion of the intermediate care sector to bring non acute beds closer to patients and to aid community care. This may be seen as a resurrection of the cottage hospital/community hospital sectors, although is unlikely to be quite the same model. It may be more efficient to commission intermediate care through established local enterprises, such as care home operators.

It is clear that there are a number of pressures coming upon the primary care sector and to healthcare generally. These pressures also create opportunities for innovative solutions to be found. The interaction between primary care, secondary care and social care is going to come ever closer and historic boundaries will need to be challenged to bring about a more efficient healthcare system which in turn will require a much different healthcare infrastructure of which property is a significant part.